as the Irish say in their native tongue:

“Happy Christmas to you!” 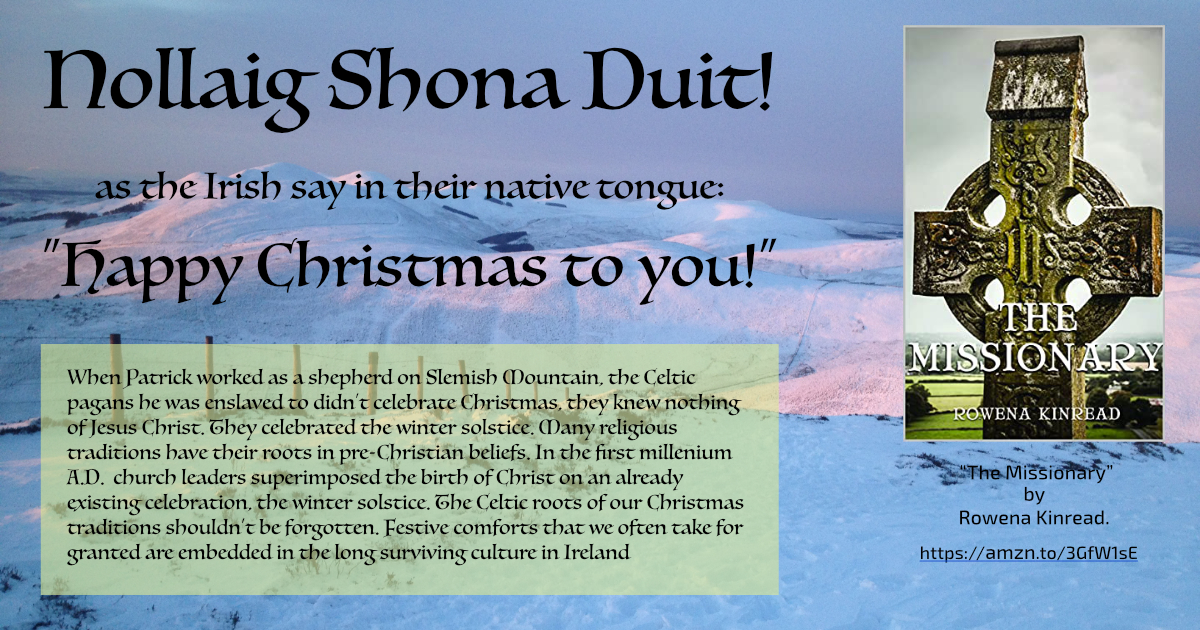 When Patrick worked as a shepherd on Slemish Mountain, the Celtic pagans he was enslaved to, didn’t celebrate Christmas. They had many gods, not just One. They celebrated the winter solstice which marks the time when the sun has reached its lowest point on the horizon in the Northern Hemisphere.
Many religious traditions have their roots in pre-Christian beliefs, and Christmas is no exception. Sacred scriptures say nothing definitive about when Jesus was born. It wasn’t until the 4th century A.D. that church leaders superimposed the birth of Christ on an already existing celebration, the winter solstice.
The Celtic roots of our Christmas traditions shouldn’t be forgotten. Festive comforts that we often take for granted are embedded in the long surviving culture in Ireland.

Excerpt from 'The Scots of Dalriada'

Irish legend about the origin of the Giant's Causeway.

“Tell me the story about the giant again” Angus begs.

Fergus sighs theatrically but repeats the story. “A long, long time ago there was a giant called Fionn, who lived here peacefully with his wife, Oonagh. Then one day Benandonner, a ferocious giant with red hair and a beard who lived in Caledonia, challenged him to a fight. Fionn accepted the provocation and threw rocks into the Western sea to make a causeway all the way to Caledonia so that the two giants could meet. Fionn crept secretly across the rocks at night so that he could spy on Benandonner and see where his weakness lay. He wanted to know how he could defeat him. But when Fionn reached the other side of the sea and saw how big Benandonner was, he fled back to Oonagh and wanted to hide. Then Oonagh disguised Fionn as a baby and tucked him in a cradle. When Benandonner came and saw the size of the ‘baby’, he thought that his father, Fionn, must be a horrendous mammoth-sized monster. He was so frightened that he ran all the way back to Caledonia, destroying the pathway behind him, so that Fionn could not follow and devour him.”

“And he was really called Fionn just like our uncle?” asks Angus.

“Yes, maybe our uncle was called after him; he’s tall and strong, after all.”